Brewing beer is an age-old tradition in Belgium. The brewing process has continuously improved over the years, but the basis of the production process has remained the same.

We would like to tell you more about the steps that we go through at our brewery:

You will see 3 large silos next to our brewery. These are the malt silos. To prepare the barley for brewing beer, it is first malted. Barley is soaked in water and then dried. The color of the malt determines the color of the beer.

We grind the malt and mix it with warm water. As a result, all sugars dissolve in the water. After filtering, a clear liquid is created: wort. The sugars in the wort are later converted to alcohol during fermentation.

The liquid wort then goes to the boiling kettle. Hopping and - depending on the beer - certain spices are added there. This also determines the unique taste of the beer. After cooking, the beer must be cooled as quickly as possible before fermentation. 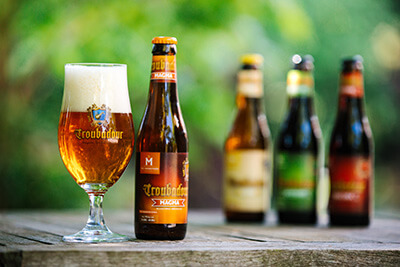 After the main fermentation, the beer is cooled and the maturing process begins.

The beer is filtered before bottling. After spending three weeks in the "warm room", the beer is ready and you can enjoy it at home or in a cafe.